My tears dropped onto the damp cloth as I washed her paws.

Though I had clung to the hope that she would pass on her own, she was not giving up the fight.  When she had struggled to breathe those nights before, I whispered, “Just close your eyes and go.” But she had regained her breath and continued on.  When she wet the bed instead of getting down for the box that Sunday afternoon, I whispered, “Please, let go.” But she had gathered her strength and hobbled over.  When she lay with her cheek in her food the night before, I pleaded,  “My darling, please.” But she had raised her head and lapped the gravy. She was not going to go quietly into that good night.

They said that I would know when it was time.  But they did not warn me of the agonizing pain that would come with it.

I washed my beautiful girl’s face with slow, gentle strokes.  I spoke to her of our nineteen years together. Of the days she raced about the house in wild abandon.  Of the nights she lay curled in the crook of my arm.  My tears fell as I told her that her sweet and silly friend Mimi had been waiting ten years for her to join her on the other side.

I choked on my heart when I told her that now I had to let her go.

My friend in Cleveland said that she had seen the perfect little calico at the pet shop.  Would I like to go see her when I visited?

When we arrived there was a cage of kittens, but no calico.  When asked, the girl behind the counter said that there had been a calico, but she had been sold a week before.  Would I be interested in one of the others?  They were all kittens from the community who needed homes.  Surely one of them would be the right match.  I returned to the cage and watched the others tumble and toss about the cage.  Cute, but none of them pulled at my heart.

Suddenly, the door opened from the other side of the cage and a hand pushed a kitten through unceremoniously –the calico!

Apparently, she had been returned that morning.  She had lived with a family for a week.  Her fur smelled of cigarettes and motor oil as it seemed they had kept her in a garage.  I was to wait until the staff meeting was over before I would be able hold her and give her the “test drive.”  But I didn’t need time to make a decision.  When I put my finger up to the cage, she reached through the bars and grabbed my finger –and my heart.

She sat on my lap as we drove 20 minutes to my friend’s home.  And then sat for another 2 1/2 hours on my lap as I took the turnpike back to my apartment in Toledo.  She was silent, except for the constant purr that rumbled in her throat.  That would be the last time she kept silent for so long.

Once she found her voice, Zoe spent nineteen years and four months talking.  She used her voice to call for me when she felt lost, to curse me when she didn’t agree, to comfort me when I cried.  In her ninth year, she spoke to me on the phone while I made a new home for us on the west coast.  And from then on, she demanded to talk to anyone who called.

Zoe was smart, inquisitive, and daring.  She raced through life determined to absorb every moment.  She never passed up the chance to investigate every corner, climb every step, or chase every bug.  She was loving and ornery.  She owned me; she owned Mimi. She loved us and kissed us when we behaved.  She loved us and bit us when we didn’t.  She was our calico.

He drove me to the beach after.

I stared at the waves.  They crashed the rocks as they always have. I watched the pelicans. Their flap-flap-glide rhythm was the same as it had been the day before.  Nothing had changed, but everything had changed.

It’s been just over a month. 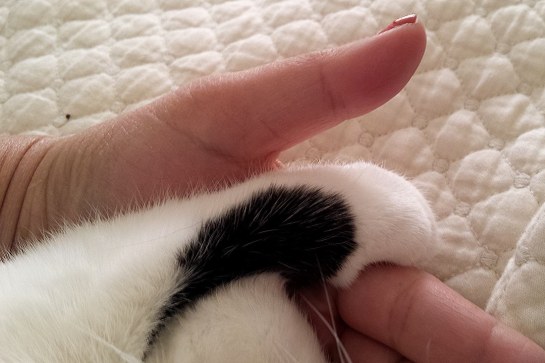